Created in 1828 by Joseph Kuhn as a modest village forge, KUHN was an early specialist in the production of scales and weighing apparatus. In 1949 a decisive step was taken: by converting to mechanical traction in that year, KUHN became one of France’s leading agricultural machinery manufacturers.

It was the start of a terrific period of development! With growing mechanisation and modernisation of the countryside, KUHN multiplied its new machines.

Innovation, quality: these were the company’s keywords, leading it to a position as a reference trademark in agricultural machinery. Discover here the history of over 50 years of expertise. 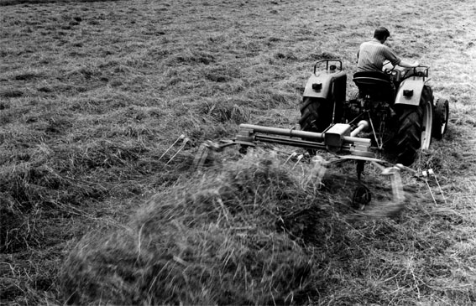 In the mid-1960s, the first KUHN Gyrotedders with two or four rotors enter the market. 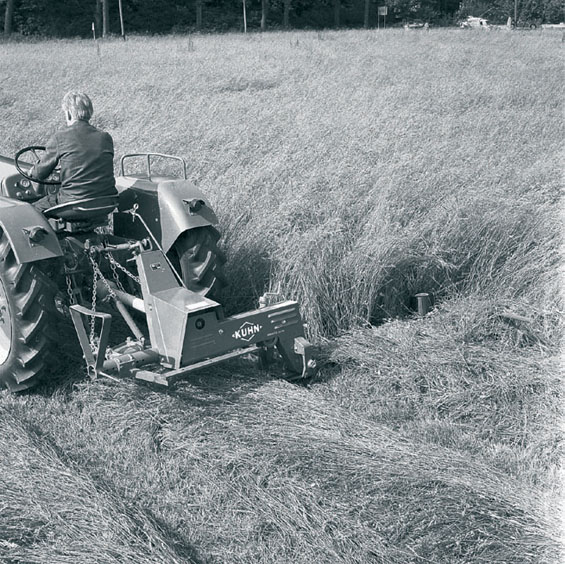 With the GMD 4, KUHN presents the first disc mowers. The new technology immediately proves itself as it performs well and cuts smoothly in difficult conditions with lodged forage. The daily process of sharpening the knives of finger bar mowers becomes a thing of the past; and the great advantage of the GMD 4´s oval discs? They actively assist crop flow to the back of the swath, regardless of whether working on flat land or hillsides 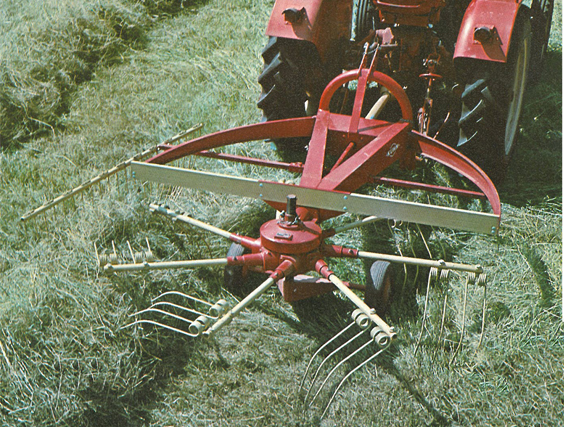 With the GA 230 and GA 280, KUHN introduces the first Gyrorakes on the market and thereby starting a new era in raking technology.

THE START OF COMBINED MOWING AND CONDITIONING 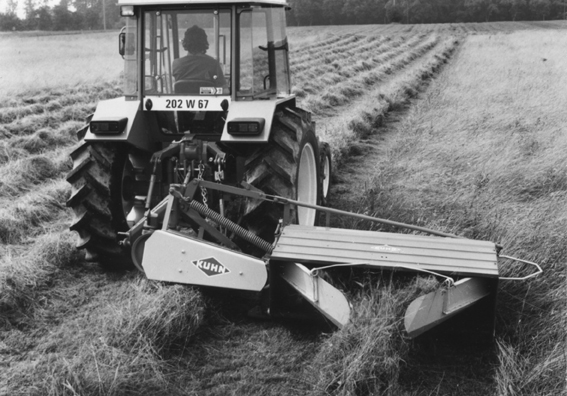 The mid-1970s mark the start of combined mowing and conditioning for KUHN and machines which perfectly complement the existing conventional mowers are offered. On the new FC 44, steel finger rotors condition the cut crop and send it through an adjustable comb. The swath boards then ensure an airy and regular swath is created. This new technology is especially beneficial for the quality of the forage as it accelerates the drying process. 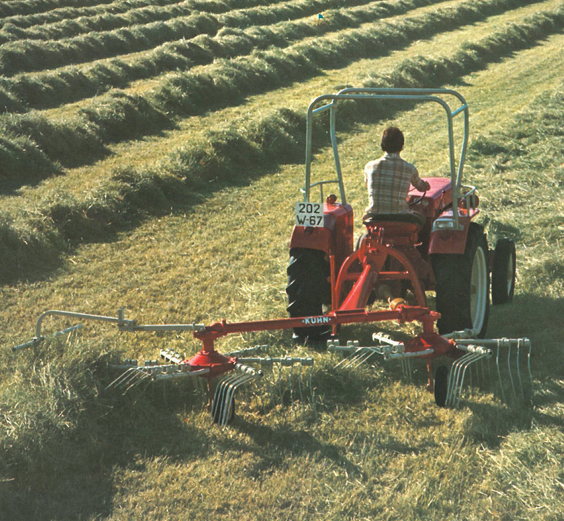 Introduction of tangential tine arm control on the GA 402: the new position of the tine arms considerably enhance the delivery and shape of the windrow. 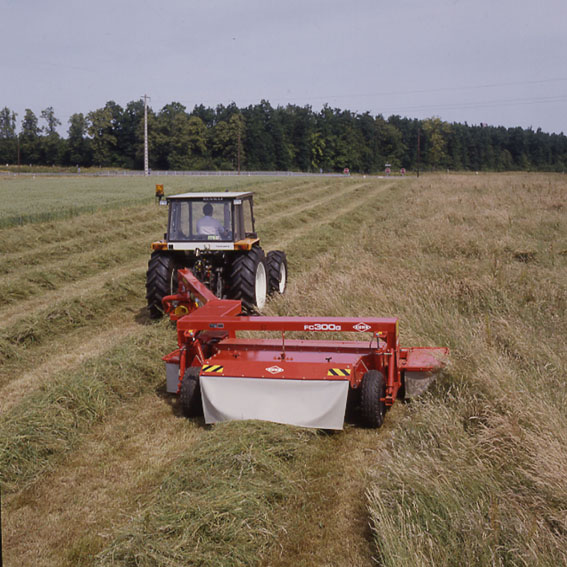 With the FC 300, KUHN launches its first trailed mower-conditioner.

A PATENT FOR THE DOUBLE-CURVED TINE ARMS ON GYRORAKES 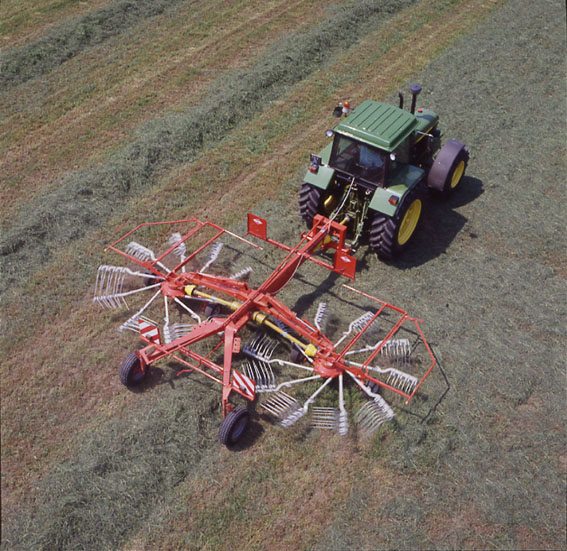 KUHN files a patent for the double-curved tine arms on Gyrorakes. They provide a much improved output and increased working speeds. Combined with the steep cam track, they make for regular and optimally delivered windrows. 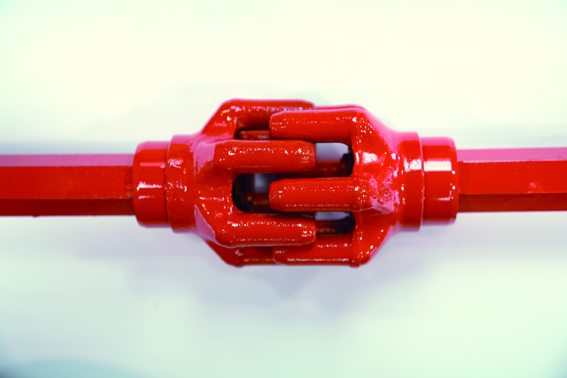 Wide-angle rotor drives via universal joints on tedders require daily greasing. KUHN introduces the DIGIDRIVE finger coupling on their tedders and thereby eliminates this annoying and time-consuming work. The patent allows a new, more compact machine and prevents damage to the drive train when folded. 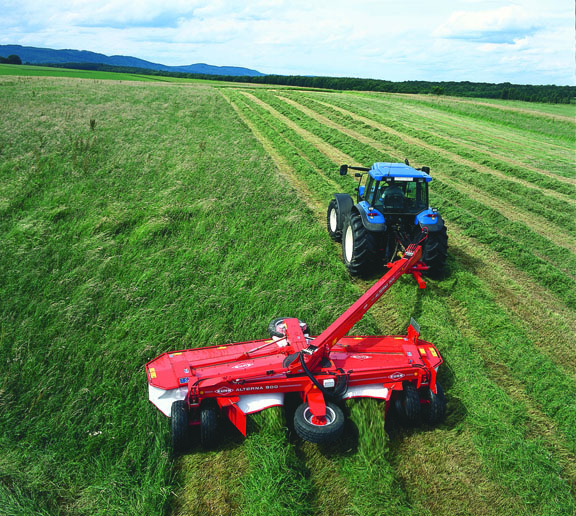 The KUHN LIFT-CONTROL system considerably improves the ground adaptation and suspension of the mowing units. The unique kinematics, with integrated Non-Stop safety, ensures a constant cutter-bar ground pressure and therefore optimum protection of the sward. LIFT-CONTROL is fitted on both GMD mowers and FC mower-conditioners.

MASTER DRIVE GEARBOX WITH SPUR-GEAR DRIVE OF THE ROTOR GEARWHEELS 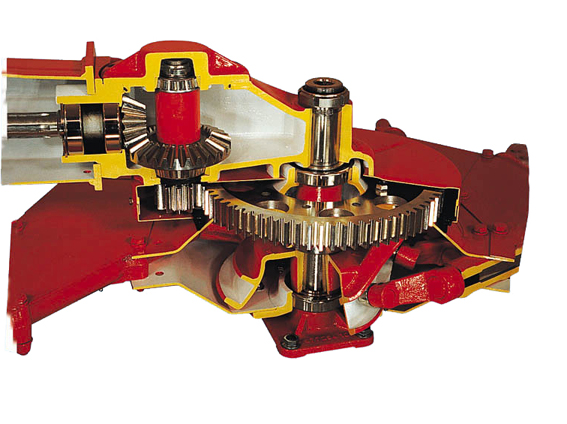 The two-stage reduction MASTER DRIVE gearbox with spur-gear drive of the rotor gearwheels is launched. In the first step, it is fitted on wide-width Gyrorakes.

LAUNCH OF EUROMIX I AND EUROMIX II TRAILED MIXER WAGONS 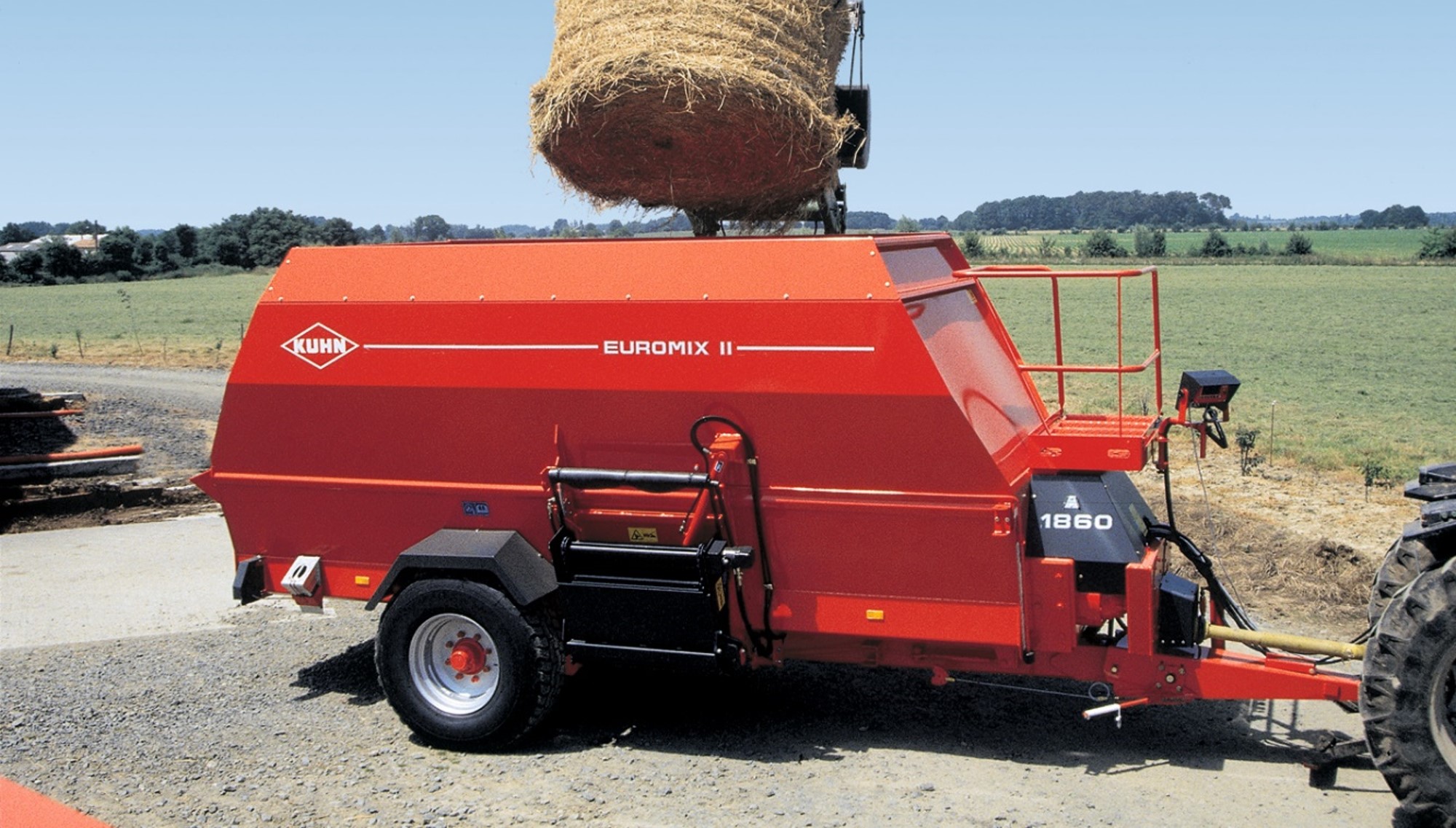 Instead of just feeding out one type of forage to livestock, the concept of creating a complete “total mixed ration” became the norm. These trailed mixer wagons were able to combine several different types of forage into an evenly mixed ration for the livestock so they could get all the nutritional value they needed in one feeding. 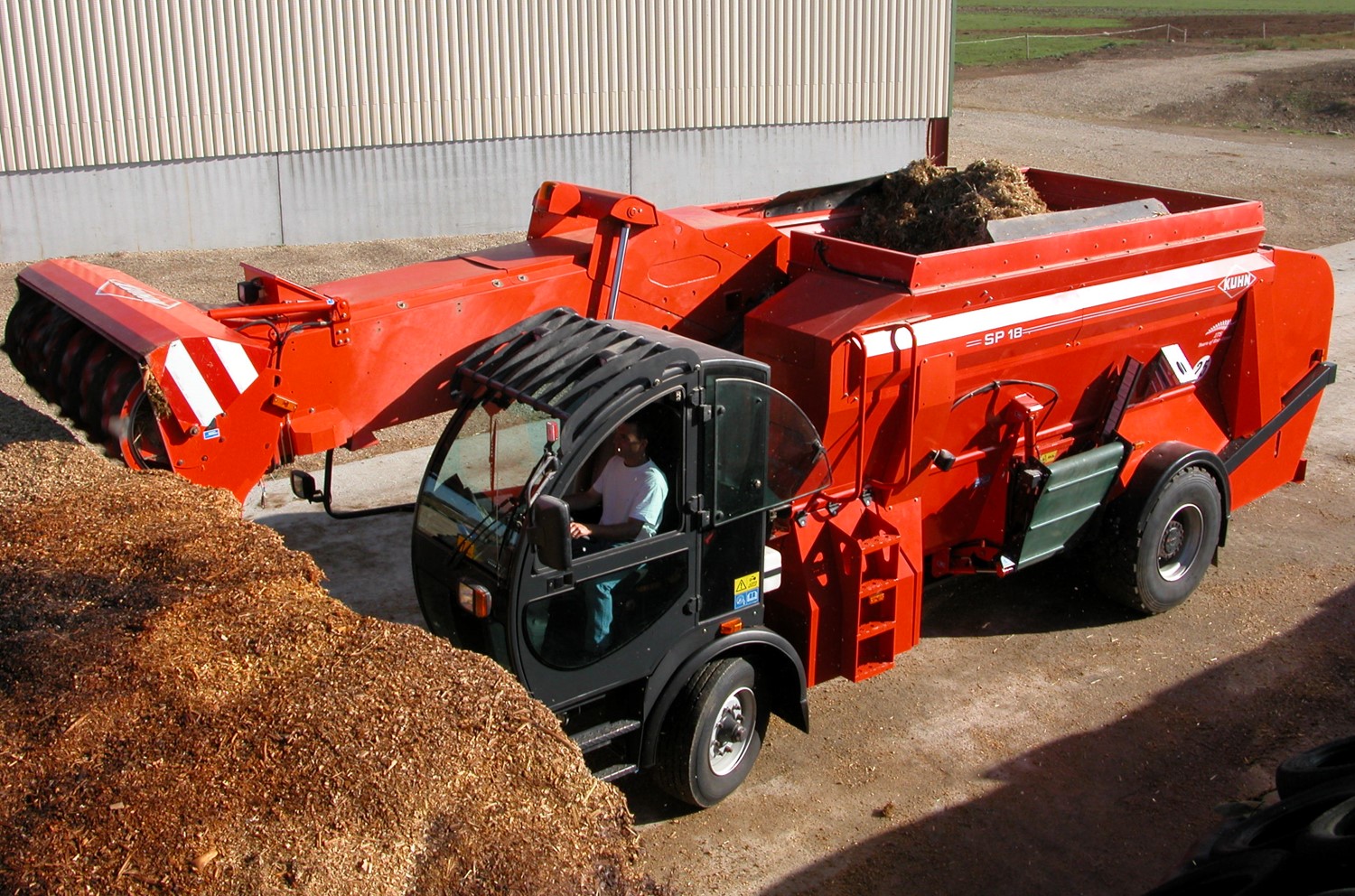 The SPH had horizontal augers and the concept of using one machine for loading, mixing and unloading the mixed ration quickly became very popular in the local area of western France. This has since been developed into vertical auger self-propelled machines which are very popular in the range today 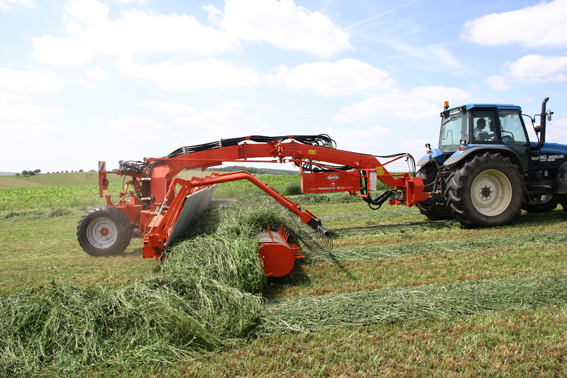 Increasing working speeds and greater volume of forage leads to increased demands as to the robustness of mowers. The KUHN answer is the new OPTIDISC cutter bar with differing distances between the discs. This high-performance cutter bar – designed for wide working widths – increases the crop flow and spares the farmer the need to change the cutter bar oil once a year.

ONE OF THE FIRST ISOBUS-COMPATIBLE WRAPPERS ON THE MARKET

The new SW 4004, which is able to wrap both round and square bales, becomes one of the first ISOBUS-compatible wrappers on the market. 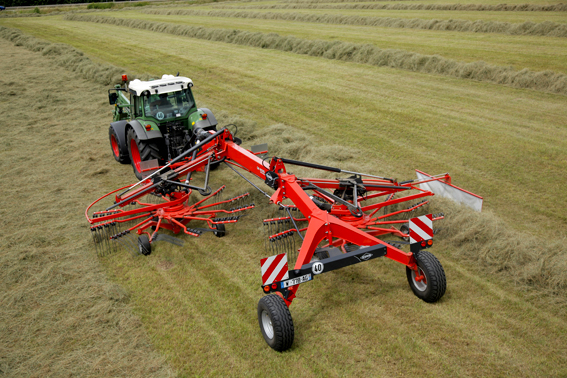 KUHN launches two key innovations on the new Gyrorake GA 8030 with side delivery. STABIDRIVE increases safety both when turning and when working on slopes, whilst the new STABILIFT rotor articulation stabilizes the rotor as soon as it is lifted. STABILIFT also allows smooth rotor lowering on the ground: rear part first followed by the front part. The plant cover is perfectly protected and forage contamination by soil is prevented. To increase the performance of their wrappers KUHN introduces e-Twin, a new wrapping technology which saves 50 % of time spent wrapping. Due to its unique combined pre-stretcher design, higher turntable speeds are possible. In addition, the film is incredibly resistant to tearing and so making the wrapping very secure. As the film is better pre-stretched and positioned by the double pre-stretchers, film costs can be reduced! 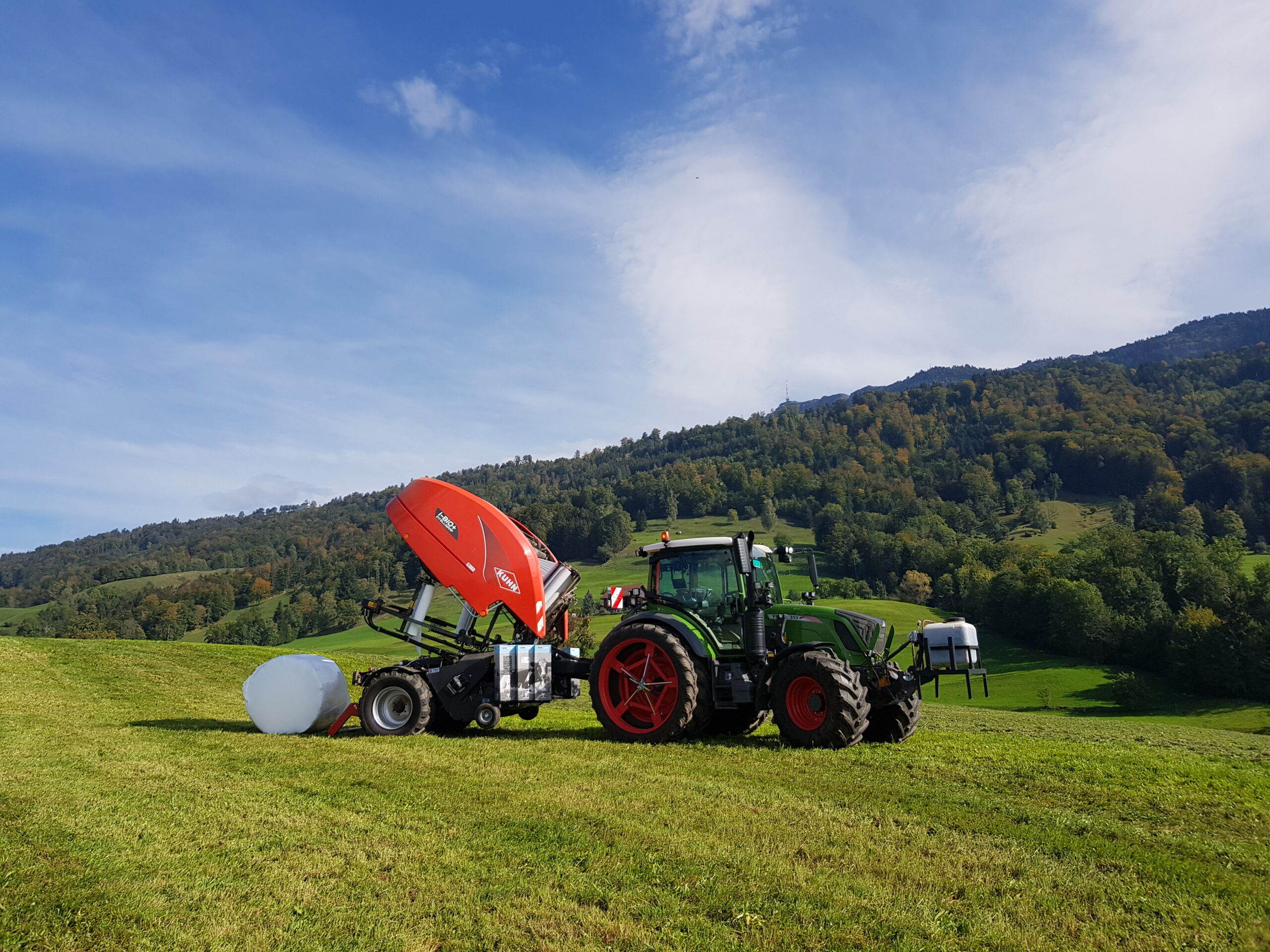 KUHN’s patented twin-reel film binding system introduced a new way to bind bales with plastic film, whilst pushing forward the concept that net could no longer be needed. From its launch on the I-BIO+ compact combi, it then became available on the FBP and FB fixed chamber baler wrapper combination and solo baler, driven by the demand of this unique system worldwide. 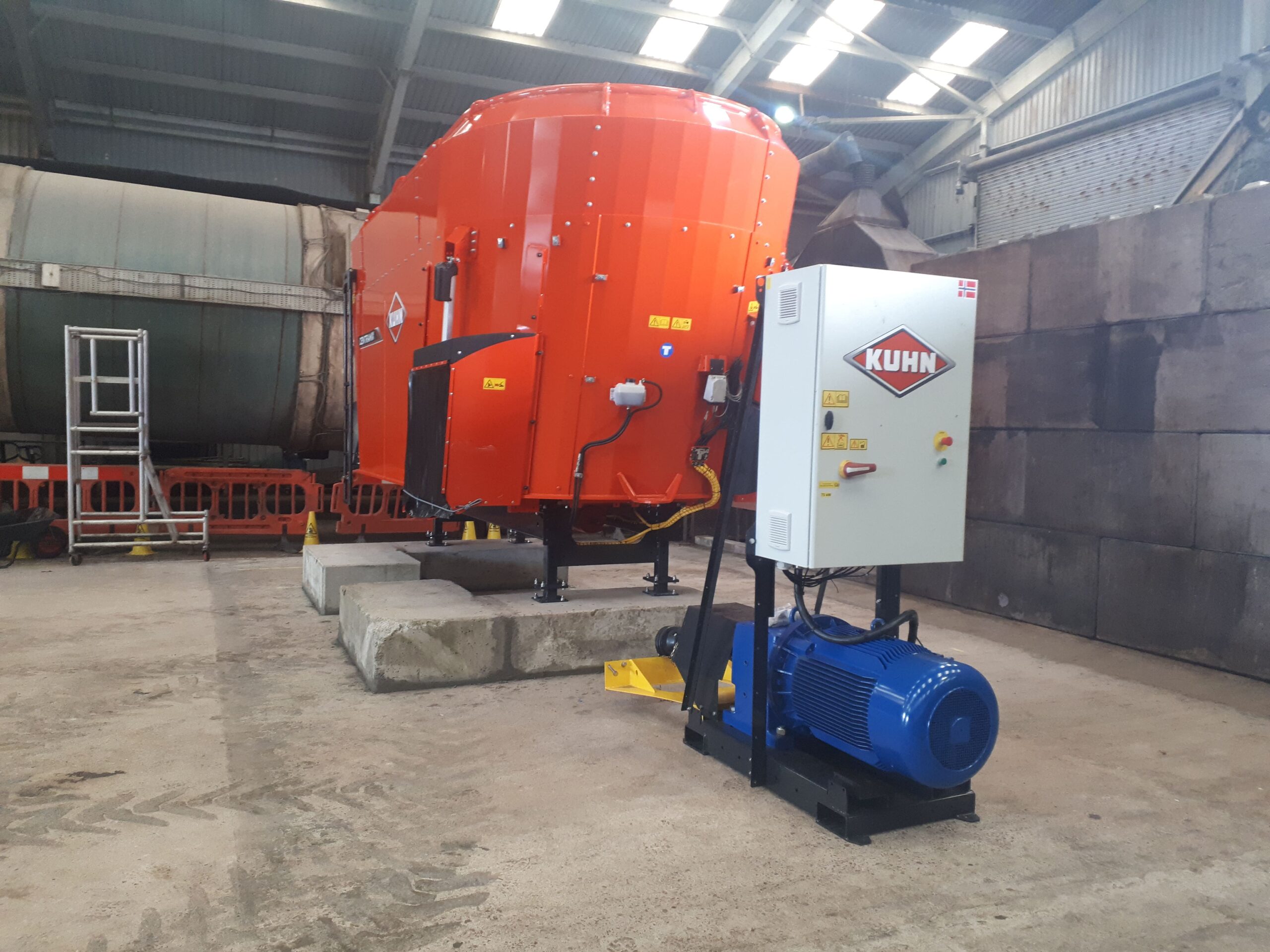 The CENTRAMIX range, used in stationary livestock feeding operations as well as for more unusual materials in processing plants, KUHN was able to draw on the designs already developed in the trailed mixer wagon ranges 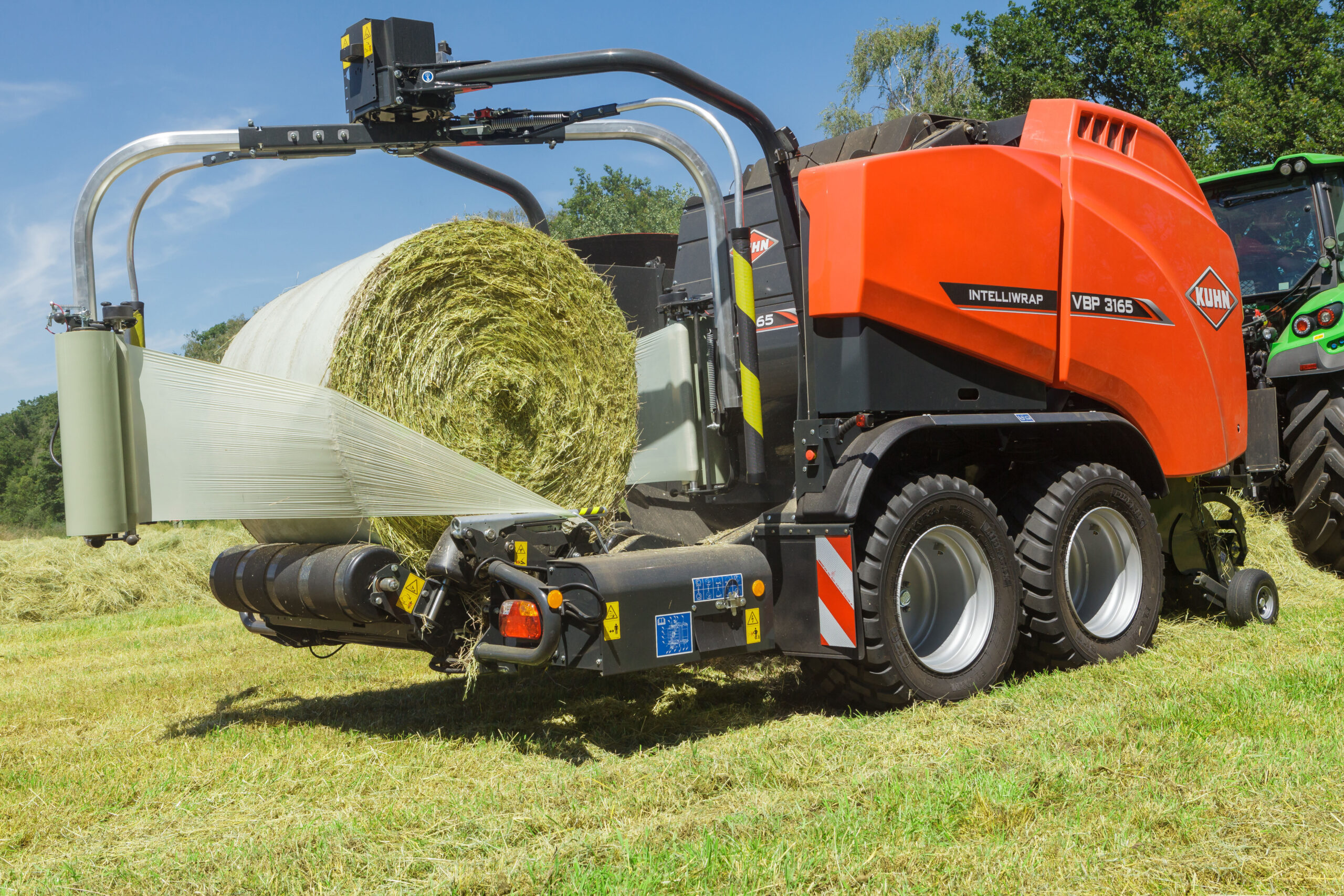 Due to the success of the launch of the system on the fixed chamber balers in the range, the popular film binding design was adapted to work on the range of variable chamber baler wrapper combination Unique to the market, this machine is the first one in the sector to be able to load, mix and unload automatically with the aid of GPS guidance. This development which drew on all of KUHN Audureau’s years’ of expertise in the livestock machinery sector, sets a standard for the future of livestock feeding

Manage Cookie Consent
To provide the best experiences, we use technologies like cookies to store and/or access device information. Consenting to these technologies will allow us to process data such as browsing behavior or unique IDs on this site. Not consenting or withdrawing consent, may adversely affect certain features and functions.
Manage options Manage third parties Manage vendors Read more about these purposes
View preferences
{title} {title} {title}